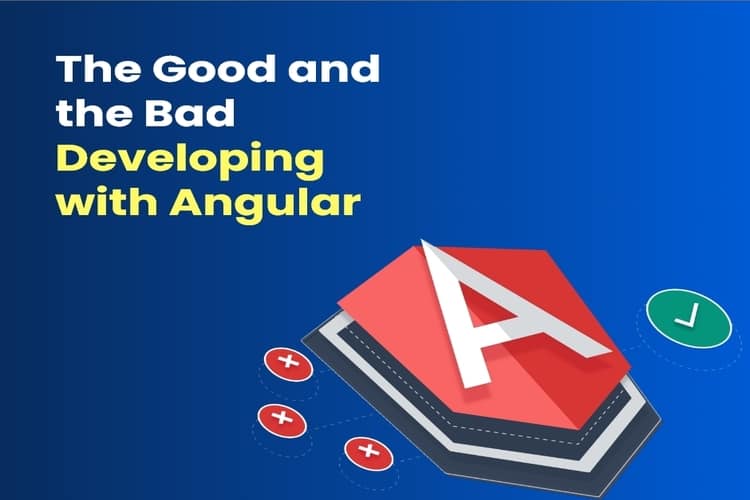 The Good and the Bad of Developing with Angular

Angular was by Google developers started as a side project in 2009 by Miško Hevery and Adam Abrons. It was called <angular /> that would help developers programmers and, designers alike create web applications by making the use of simple HTML tags. The name “Angular” comes and is derived from the angle brackets, or <> that surround the HTML tags.

Prior to AngularJS intro, HTML, which is the hypertext markup language or (the web mark-up language) was always static, which means that the users were not able to interact similar to responsive interfaces provided on the HTML pages.

Google released its next version of Angular 2 in September 2016. They re-wrote the framework and redesigned it in order t to entirely match the increasing requirements of the modern web. Angular (also referred to as Angular 2+) was built and is designed and coded using TypeScript. This language offers developers and programmers with robust tools for building the client-side of web applications.

The good of Angular

Angular reduces the burden or the overwork that exists from server CPUs. This is because it supports caching and other processes. In simple words, this means that the server performs very well due to the reduced traffic. The angular server is capable as it only serves static files and reacts to the API calls.

In AngularJS, the ‘Model-View-Controller’ or MVC architecture as it is called is known to binds value to the framework when making a client-side app. Plus it also establishes the most important and required as well as critical and essential features like data-binding and scopes. MVC framework provided by angular automatically integrates app the app elements without adding extra code.

With the MVC architecture, it is possible to isolate and use the provided app logic from separating it from the UI layer and support the separation of concerns.

The controller [C] or the C module gets all the requests for the app. The controller then is able to work with the model [M] to create any data required by the view [V]. Consequently, the view makes use of this data that is created by the controller to exhibit or process the final displayable response.

You can think of components as small pieces of interface or units that are cohesive and designed to be independent of each other. In other words, think of this as a simple app with a list of items and a corresponding search box for you to retrieve the items by word matches.  This is that feature that provides the ability and allows for building UIs with many parts and in the meantime, streamlines and eases the development course for developers.

Re-Usable-Similar components are bundled into modules and are greatly encapsulated, or we can say self-sufficient. Developers and designers or programmers can reuse them on different parts of an app. This is particularly beneficial and useful when it comes to enterprise-scope apps. This is the area where diverse and different systems come together but have many similar elements like date pickers and search boxes etc.

Readable – Encapsulation also makes sure and provides and enables developers to easily read code. This encourages better productivity and is done faster.

One of the benefits of Angular that it provides to the developers is that it builds highly testable and verifiable websites and applications. The framework provides and allows for end-to-end testing and unit testing (used for checking the app performance and verify whether it works as per client requirements). This makes debugging as well as testing easier.

This framework is practically built keeping in mind the requirements of end to end testing and maintenance. With the help of Dependency Injections (DI), the testers and programmers are able to easily insert the test data in the controller in order to check its output and behavior. Other unique testing tools that are provided by Angular include Karma, Jasmine and Protractor etc.

Angular expedites and simplifies that data-binding process that takes place. This process doesn’t need a developer to put in work at all. The process is mainly referred to as two-way binding. Two-way data binding makes sure that the changes are made to the view are instantly presented in the model and vice-versa.

Directives that enhance the HTML functionality.  This functionality is used and is appropriate for dynamic client-side applications.  These are the applications that begin with the prefix ng so that HTML can determine them and understand that they are app elements. Directives are able to keep the scripts and HTML pages free of clutter. They also organized and allow independent codes by stuffing specific functions together. Directives encourage reusing of code repeatedly. Besides angular also provides a set of default directives.  Because of this, angular also permits developers to make custom directives.

Also Read: 9 Reasons Why AngularJS is the Most Popular Framework

Angular comparatively to its rival or other popular JavaScript frameworks takes the pressure off the developer to actively manipulate DOM.  (Document Object Model) All the credits go to its two-way binding approach. Because of this, it saves the developers the time and the efforts typically spent on coding, translating and updating DOM elements.

When developers make use of Angular, faster prototyping is possible. As a developer, you can develop app prototypes with good functionality in less time. All of this is done by writing significantly less code and obtain feedback and make changes quickly.

Plus, a fast learner or a new or familiar user can get easily experienced or familiar with Angular in no time. The moment they are comfortable with it- they can see their development efforts and time dealing with it decreasing.

The main boost in development and programming tasks is because of multiple factors such as hierarchal dependency injection, Angular universal as well as Ivy renderer etc.

Dependencies are able to outline how the diverse pieces of code interact with each other. How the changes in one component impact and influence others. Generally, all of the dependencies are directly defined in the components units themselves. So every change that occurs and happens in the dependency would need modifying the components as well. With the help of  Angular, injectors that outlined the dependencies can be utilized as external elements decoupling components from their dependencies.  DI is able to make and provide the features of components to be more re-usable as well as simpler to manage/test.

A renderer is able to make an efficient translation of components and templates into JavaScript and HTML. These are codes that browsers can easily understand and exhibit. It also is able to apply the tree-shaking technique, i.e. it eradicates and minimizes the use of unused pieces of codes thereby making the application faster and easier to load. Plus, it is fully backward compatible (after your Angular update your existing application can be rendered with Ivy without problem).

This assortment of Material Design elements and units that are improved for Angular allows developers to easily integrate UI components.

Starting from the 6th version of Angular, engineers and developers are able to easily add custom elements to any web application created with JQuery, React or Vue etc.

The bad of Angular

Imagine and suppose that your computers have access to your server. But the support for the JavaScript language is disabled. In such cases, the associated users will not be able to fully access your website or apps. If there are many users who experience this situation, you can expect your Angular-based websites to be less fruitful and useful to such type of users. This is not the case with web applications that are based plainly on HTML-based.

Angular is a versatile instrument, and this makes it possible that there is always more than one way to complete any task. Because of this it can cause or create confusion among developers. There many tutorials and videos that are available as well as many online discussions, however, that can resolve most of the problems.

Regardless, if your team consists of new developers that are experienced or familiar with JavaScript to use the new Angular. These developers may face difficulties compared to similar React or Vue on-boarding. The learning curve is steep and the developers have to know many things at once. They have to have knowledge about dependency injection, modules, services, templates, etc. Plus, learning RxJS (the reactive programming library for asynchronous programming) and Typescript is mandatory for Angular has added on to the burden which is another point of contention for many developers.

Layered as well as organized hierarchically, scopes can be difficult or complex to handle. This is the case if you have no prior experience with Angular. One of the most difficult things you need to do is debugging the scopes.

The difference between the AngularJS as well as Angular is so large and humongous. This makes the migration between these two versions to be difficult. Switching from a higher to a lower version has always been more difficult and tedious. There is an entire section dedicated to the Angular documentation that lists all the possible ways to deal with the migration.

Some developers and programmers have always complained regarding the existing state of CLI documentation. They have been expressing concerns regarding insufficient information on the official documentation on GitHub. Fortunately, there is a huge and helpful and large community to help developers out.

We have shared with you the best and the worst or Good and bad of angular when you use it. If you have any requirements to develop angular applications from our Angular Developer then do contact us at enquiry@nimapinfotech.com with your requirements.