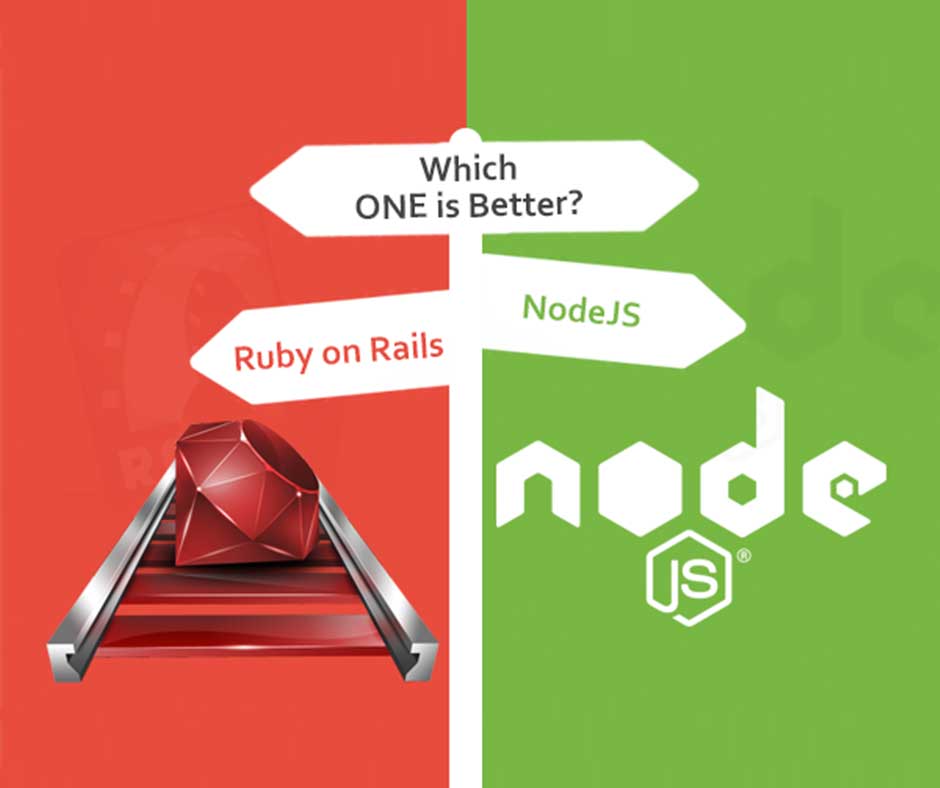 Nodejs vs Ruby on Rails

In this article we are going to compare and contrast two technologies, that is NodeJS and Ruby on Rails(Nodejs vs Ruby on Rails). Both of these frameworks are developed for web application designing and programming. Let see what sets them apart as well as the similarities and differences between each of them.

Difference between Ruby On Rails and NodeJS:

NodeJS is a runtime library and an environment that is cross-platform compatible and is mainly used for creating JavaScript-based applications that run outside the browser. It is free to use as well as open-source and is utilized for developing server-side applications. NodeJS allows developers to run applications on the server-side of the web architecture.

NodeJS provides a way that is much faster to write scripts that are light and scalable. Programmers and developers are able to write real-time applications, and at the same time provide some scope for mobile application development. Developers can easily utilize both the front end and the back end development using the same JavaScript code

There are several server-side capabilities that NodeJS is able to provide. A developer is able to listen to and can reply to HTTP requests on the computer, listening to the network traffic and at the same time access a database from the computer directly.
NodeJS uses an event-based model in order to address scalability, and allow the development using rich JavaScript libraries for JavaScript modules and this helps in simplifying the code logic.

There are plenty of frameworks that are based using NodeJS, for example, Expresses, Partial JS, etc. When the question is about building fast and scalable server-side applications, then NodeJS is the clear cut winner here. NodeJS provides JavaScript the ability to interact in real-time with I/O devices (Input/Output Devices) through the use of its APIs, it can also connect with external libraries that are written in various other languages.

Ruby On Rails is an MVC (Model-View-Controller) based web framework that is able to provide a structure for a database, webpages as well as web services. There are various wen standards such as JSON and XML that are used for data transfer purposes and are facilitated by Rails. There are some other paradigms that are promoted and supported by Rails such as CoC (Convention Over Configuration) and DRY(Don’t Repeat Yourself) and the active record pattern.

Rails that made its mark in the early 2000s have greatly impacted the web development field through the introduction of many innovative features such as seamless database table creations, migrations to enable rapid application development, and so on. Its influence on other frameworks is pretty apparent.

Ruby on Rails also includes some tools that make common development tasks much easier for example scaffolding that can automatically create and construct some of the models and views that are required for the website. Another tool is WE Brick, which is a ruby web server that is distributed with Ruby. Using together with Rails, these tools are capable to provide a basic development environment. Rails also has an advanced level of support for JavaScript libraries as well. Initially it utilizes lightweight SOAP web services but it is later replaced by REST web services.

You may also like to know:  Ruby vs Ruby on Rails

Head To Head Comparison of NodeJS VS RoR(Nodejs vs Ruby on Rails):

Key differences between NodeJS and Ruby On Rails(Nodejs vs Ruby on Rails).