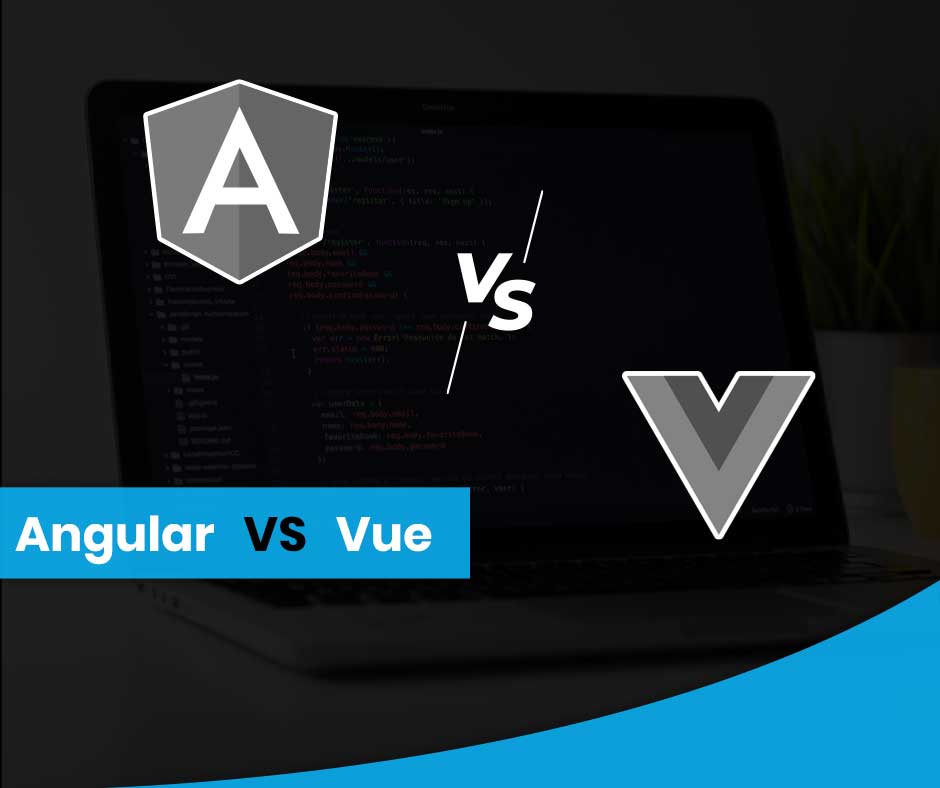 Firstly, it seemed like everyone wanted to write his or her own framework. Besides Knockout, Backbone, Marionette, software developers thought they could earn bragging rights by reinventing the wheel and creating their own framework. The churn rate was very high, and developers had to learn a lot to keep up with the pace. In summary, the framework wars and the days of ultra-high churn rates are over. Three participants carved out their own niche: React, Angular, and Vue. Angular and Vue are similar in terms of syntax.

These technology stacks are invented to solve a particular computing problem and help create awesome applications and programs that helps the people achieve things.

In this article, we will compare and contrast Angular and Vue to help you decide which to include in your tech stack.

Particularly, although the syntax of the two frameworks is similar, the use cases for Angular and Vue are different. These use cases are well illustrated by the history of each framework.

Both of these technologies have similar kind of syntax and both are easy to learn for beginners and novice programmers and developers.

Angular is a highly popular corporate solution. Banks, financial institutions, and backend developers normally favor Angular. Angular is backed by Google, and companies like WhatsApp, Instagram, PayPal, and many other established companies use it.

Some popular websites made using Angular:

Vue was created by Evan You, an ex-Google employee. In fact, Evan worked on Angular at Google, which means he has an in-depth understanding of the ins and outs of Angular. The pitch of Vue is to build fast, progressive JavaScript applications quickly. Companies like Alibaba, GitLab, Grammarly trust Vue.js, and it seems these companies appreciate the benefits of Vue.

Angular is the default commercial solution for developing enterprise application clients. Angular is a bigger, more mature framework, and it generally takes more time to develop applications. Vue on the other hand is great for simple, performant applications, as well as for rapid prototyping.

Some popular websites made using Vue:

To get somewhat of an idea of the recent usage of Angular and Vue, here are the total number of downloads in the last year by developers from NPM:

The GitHub Activity of the two frameworks is really interesting. Vue has more stars and forks than Angular. At the time of writing this article, Vue has 18.2k forks and 130k stars, while Angular has only 11.8k forks and 45.3k stars. Vue has clearly become more popular among the masses. Angular only leads in terms of the number of contributions: 845 vs 260. This is expected though, as Angular has been around longer than Vue. Angular being more mature than Vue framework, the latter has more forks and stars as proved in Github developer activities.

Recommended Read: Angular vs React vs Vue: Which Front End Framework to Choose?

According to the State of Js 2018 Survey, Vue.js does something right. Vue positions not only offer similar average salaries as Angular salaries, but the number of developers abandoning Vue.js after trying it out is a lot smaller than the number of Angular developers who want to abandon Angular. Currently, around the same number of experienced developers are willing to work with Vue and Angular, but Angular has been abandoned by a seriously large number of developers, possibly in favor of Vue and React. According to the survey, more people are interested in learning Vue than Angular.

When using these technologies the main point is that the developer experience also matters the most when it comes to using a particular technology stack or framwork.

I left the most interesting number to the end of this section: runtime performance metrics. Check out this benchmark for more details. Generally, both Angular and Vue are green, or at worst yellow, in most metrics. Only one metric stands out negatively for Angular: the non-keyed Script Bootup Time. Angular’s 227.6 vs Vue’s 56.9 clearly indicates the cost of including Angular in the code base. In applications, Vue is the natural choice where there is restrictions of space and memory. Based on generic data, startup and memory allocation are the weak spots of Angular, while it outperforms Vue at runtime metrics. Both of these technologies provides adequate performance when it comes to design and development of single page applications and web based application implementations.

When comparing Angular to Vue, your best source of documentation is a migration guide from one framework to the other.

With Angular, using TypeScript is mandatory. As not everyone likes TypeScript, this is a polarizing decision from the authors of Angular. Vue decided on not making TypeScript mandatory. The vue.js official site claims, “In many smaller-scale use cases, introducing a type system may result in more overhead than productivity gain”. Therefore, Vue.js supports TypeScript’s static type checking system, but its usage is not mandatory.

Vue is generally less opinionated than Angular. This means there is no one way of writing code in vue.js, software developers can be more creative, and use vue.js in the way they want to. As a result, quick wins are faster to reach, and the learning curve of vue.js is a lot less steep than the learning curve of Angular. Authors of the official Vue guide claim that developers can get started developing Vue applications in less than a day. This is yet another benefit in favor of vue.js when used for rapid application development.

Here are a few of the noticeable advantages of using the Angular framework:

Developers and programmers get a wide linking module from Angular due to its single-page app development. It helps programmers and developers understand the way Ajax functions and they are able to add its benefits to your app project.

Angular framework offers better features and functions that facilitate server-side rendering to increase the speed of the client-side page. It produces and allows the development more SEO-friendly JavaScript framework.

Angular offers a variety of different tools and filters, tools, as well as features to create a faster and better development environment. These features incorporate and provide support for Node 10, a preview of Ivy, virtual scrolling, lazy loading, etc.

The MVC (Model-View-Controller) model helps in concerns’ separation for coding components. And Angular follows the same. Thereby, it gradually increases the speed for faster and cleaner development.

Developers and programmers can easily install and use Angular CLI. It provides mobility that professionals demand with easier commands and efficient testing tools. Many platforms support it for helping developers update all the app elements.

Moreover, it incorporates the components that depend on third-party APIs and libraries.

Angular IO offers some advanced options for debugging as well as refactoring that help developers and programmers in maintenance and testing procedures. Moreover, it can examine the entire project in just one shot using one testing tool like Protractor, Karma, or Jasmine. Also, it reduces the hassle of programmers and developers to make sure highly efficient outcomes.

Vue.js is becoming one of the famous front-end JavaScript frameworks that you can employ to meet your app development needs, with advantages like:

Vue CLI falls under the category of one of the most famous JS frameworks in 2019. In comparison with other frameworks incorporating Angular, its CLI is basic and is going to be very fundamental.

Apart from this, it has an updated and superb documentation. This is why it has become the first choice for option for people who want to enter the development environment.

Another benefit of Vue.js development is that the developed application is as lightweight as 18kb after zipping. For this reason, it is the first option to target the user base that makes use of and needs low memory consumption with amazing features accessibility.

The app size is one of the prime reasons why developers and programmers like Vue. It contains a minimal app size and thereby, you can download and use the app faster and in a much easier way.

Since the Vue is written in JavaScript and has the property that provides developers with clean codes, anybody can use this framework to read and understand the code easily and efficiently for taking the process of app development further. You don’t need prior programming and development experience to use Vue, although this can provide an added advantage.

Another advantage of Vue.js is that it also provides the choice of server-side rendering. This boosts the speed of the execution for functions of pages on the client end, which gradually provides a better and much-enhanced and cleaner user experience.

Vue.js aids and provides an easier and simpler integration procedure. This is why developers and programmers prefer it for both creating single-page apps from the beginning as well as the facilitation of integration of high-end elements into the present one.