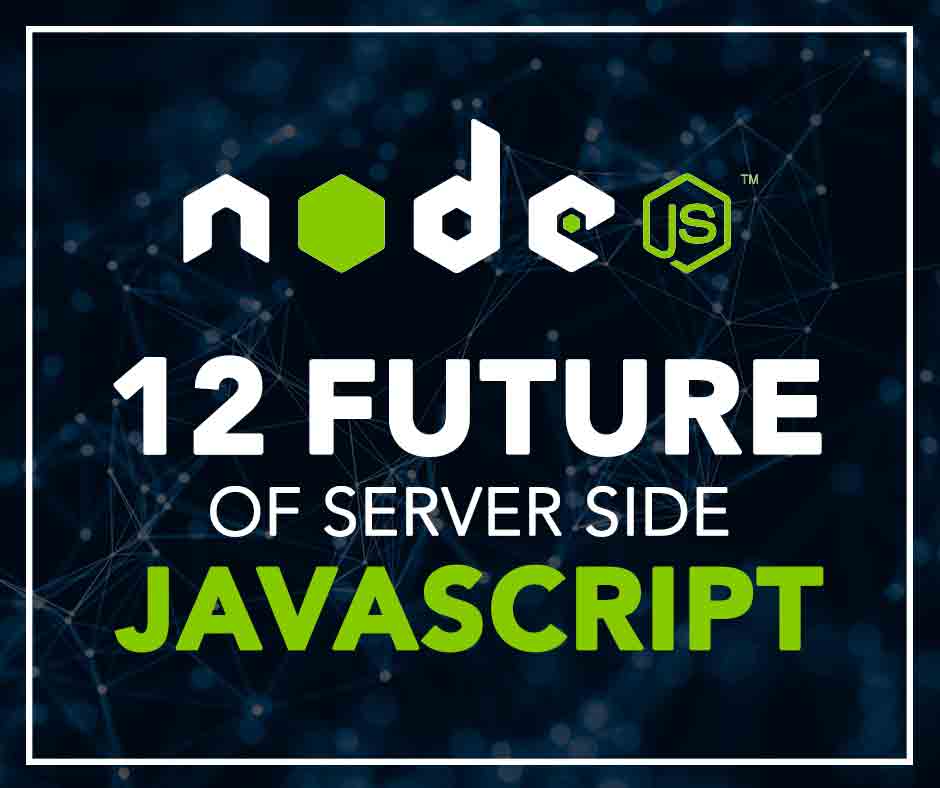 NodeJS 12: The future of server-side JavaScript

JavaScript has been a boon to the industry of computing. It has proven to be the most effective tool for use in advanced web applications. With the spurge in various technological applications it is worthwhile to know that JavaScript increased in popularity. So does the advancements in JavaScript frameworks started to emerge. This has been a trend setter in providing the required functionality. It provided the much needed features to web applications.

There is no doubt that frameworks based on JavaScript are on the rise. These frameworks are capable to provide any functionality that you need in your application. It has now been much easier to incorporate and code the features and functions that web applications need. In recent years, Node JS has caught our attention, to provide the needed server side functions and features. Server applications has been a daunting task to program and code. With the introduction of node js, programming server side applications has been much easier now for programmers and coders.

Node JS is ever-growing and a game-changing technology introduced in the early 2009s. Since its inception in 2009, it has followed an upward trend. And has been a valuable platform for many developers alike. In short, NodeJS allows developers for using JavaScript to run on the server-side. And produces changing or dynamic web content. This is done before the final page is sent to the web browser running on the user’s computer. Node JS represents a JavaScript anywhere paradigm. This platform is able to unify the web application development process around a single programming language. Instead of using different programming languages for the server-side as well as the client-side scripts.

On April 23, 2019 Node JS 12 was officially launched for use with the public. JavaScript enthusiasts everywhere celebrated. And this update was not about just a regular old version. This update was going to be a big overhaul with the use of some major features and upgrades being presented to users. Let us see what has changed.

With the addition of expected performance improvements as well as tweaks that is bundled with every new version of the JavaScript V8 engine, there are some really noteworthy upgrades this time. These include the following:

This serves to enrich the error. Stack property by using asynchronous call frames without the addition of the extra runtime to the V8 Engine.

Earlier, V8 had to handle all the function calls that had too many or too few parameters the same way, which had a performance cost to be borne. Now the engine developed is smart enough to know when it can skip this step. And this reduces the overhead caused by up to 60%

Using async is actually two extra micro ticks faster than using promises now. If you felt that you needed a reason apart from the more synchronous- style syntax async / await provides to the developers who are not acquainted with promises

At the start of a web page, the V8 engine spends just 10% of the time parsing JavaScript. The latest JavaScript parser that has been released has improved the parsing speed by up to 30% on the desktops.

TLS that stands for transport layer security, is how Node handles the encrypted stream communication.

With the release of NodeJS 12, TLS gets upgraded to version 1.3. This sounds insignificant but it proves to be a major update that has numerous performance as well as security enhancements. It sounds counterintuitive at first, TLS 1.3 is actually simpler and easier to implement than TLS 1.2, making it more secure, easier to negotiate as well as quicker to negotiate between applications.
If we use TLS 1.3, the Node applications will have increased security and heightened end-user privacy while also improving the performance of requests by reducing the time required for extra handshakes for HTTPS.

The conclusion, better and improved security for everyone and it uses less latency between communicating services.

You may also like to know: NodeJS vs Python

Let us discuss some lower-level improvements. Up to, this point, the JavaScript heap size had defaulted to the max heap sizes set by the V8 Engine for use with the browsers, which could be manually configured otherwise. Starting with the release of NodeJS 12, the heap size will be set up depending on the available memory, and this ensured that NodeJS does not try to use more memory than what is available and terminate the process when its memory is exhausted

We can say goodbye to out of memory errors- at least some time when we process a large amount of data. The old –max-old-space-size flag will still be available will be available to a different limit if it is needed. But this feature will, in turn, reduce the need for setting the flag.

Unknown to many, the current http_parser library that has been used in Node has been extremely difficult to be maintained and to be improved upon. That is the reason why llhttp was born. This project is a port of the http_parser to TypeScript which is then run through llparse to generate the C or bitcode output.

It turns out that all HTTP is way faster than http_parser by about 156%. It has been written using fewer lines of code.  All the performance optimizations have been generated automatically as compared to http_parser’s hand-optimized code

In NodeJS 12, the development team has decided to switch the default parser to llhttp for the first time and put it to the test. We can all hope that it continues to perform well when lots of different applications with lots of different needs are using it out.

When we switch to the conversation about debugging, there is a newer experimental feature in NodeJS 12 that allows the users to generate a report on demand or when certain trigger events occur.
This kind of real-time reporting can easily help diagnose and correct the problems in production, slow performance, including crashes memory leaks, unexpected errors, high CPU usage, etc. – the kind of stuff usually takes a lot of time and hours if not days to debug, diagnose and fix.

Another feature in this release for Node JS is around heaps. This is sure to speed up the debugging process, is integrated heap dumps, which ships with NodeJS 12, already built-in.
Now there’s no need to install new modules for the investigation of memory issues – just tell Node what kind of JSON-formatted diagnostic summary you want to use in the command line or an API call and you can be able to parse through all of the info.

Native modules get easier in Node.js

Stepping back up from the muff that aide low-level improvements, there’s some cool stuff also coming for developers as well as the module makers within the Node ecosystem.
Developing as well as building the native modules for Node continues to improve, with changes that now has included better support for native modules when used in combination with worker threads, as well as the version 4 release of the N-API, this has made it easier to configure your own threads for native asynchronous functions.
Summed up, this means that creators and maintainers of Node-specific modules have almost as easy a time maintaining these modules as pure JavaScript module creators. The increased complexity that resulted from maintainers needing to rebuild the distributed binaries for each Node.js version. They wanted their modules to support is now largely abstracted away courtesy of the N-API.

Node.js 11 had reduced the startup time of the worker threads by almost 60% by using built-in code cache support.
NodeJS 12 has built upon this idea in order to generate the code cache for built-in libraries in advance directly at build time, this allows the main thread to use the code cache for starting up the initial load of any built-in library written in JavaScript.
The result is that there is a 30% speed-up in startup time for the main thread. And your apps will load for users faster than ever before.

The Node JS platform now being 10 years old.  It is single-threaded and most widely used as well as adopted. Yes, it is not as widely adopted and used as some programming languages. Node JS is able to be used for both the client-side scripts as well as the server-side programming.

Node JS is able to bring some exciting improvements like ECMAScript Support, better application security and quicker startup times. If you have found this article and have enjoyed reading it, do check out our other articles. If you’re looking to hire NodeJS developers or eager to hire JavaScript Developers then do contact us, we have the most professional and experienced NodeJS developers ready to onboard for your project. You can also hire developers in Dubai, UAE</s